Sappho: The Sweetness of Honey 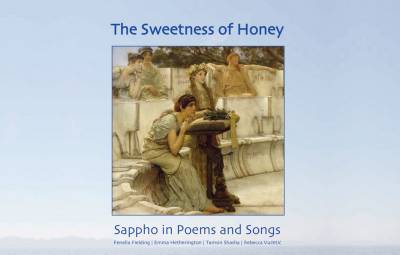 aod have been working with David Stuttard on a new collection of spoken Sappho poetry and poems set to music called The Sweetness of Honey.

Saturday 12th July in London, so do get in touch for more details Numbers are strictly limited so contact us early to reserve a place.

Produced by aod, the poems of Sappho (based on translations by David Stuttard and Josephine Balmer) are read by Fenella Fielding and Tamsin Shasha, and set to music by Emma Hetherington, who performs them with Rebecca Vučetić.

Who could possibly resist this? Charismatic, sensuous, sublime: Imagine yourself under Sappho’s silvery moon, the warm wind of her beloved Lesbos around you, the oak leaves shivering; our poet and her lovely girls your companions. A lyrical delight

Sappho’s is the first female voice in western literature. Today only some of her poetry survives, but it remains as startlingly fresh as it was when it was first written around 600 BC. With subjects ranging from love and desire to old age and sorrow, Sappho’s verses not only transport us to the flowering meadows of ancient Lesbos, but speak to us directly of emotions with which are are all familiar.

This CD contains fifteen of Sappho’s poems, many translated especially for the collection, and including one which was discovered and published for the first time in 2014. In addition, nine of the poems (together with a haunting inscription from a fifth-century BC Athenian gravestone) have been set to music by Emma Hetherington, who performs them with Rebecca Vučetić, accompanied on instruments ranging from piano and guitar to harp and double bass.